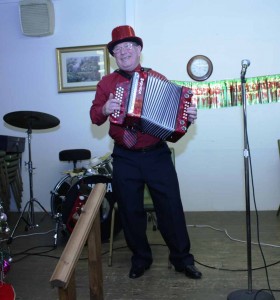 festivities. The guest artist was Anton. a local lad renowned for his singing.

of them came bearing gifts, (raffle prizes) which enabled us to have a super display

of quality prizes on the raffle table.

popular tunes followed by Anton who sang us throught to the interval.

The ‘kitchen staff’ did the club very proud with an excellent table of goodies.

A round of thanks is due to them, as we know that they had spent most of the day

cooking and preparing the food.

After the interval John Mason began his ‘comedy act’ with his pride and joy, his very

the amazing accordion and earned a great round of applause. John is rapidly getting

the hang of this amazing instrument and raises an awful lot of cash for local charities.

He raised more laughter with his pet ‘ferret’ which was rather naughty.

Barry and Roy, the drummer, then did a rousing spot with a selection of tunes and

sing-alongs. With a nicely warmed up audience Anton was able to finish the evening

off in style. A very pleasant night with varied entertainment, good food and a happy

audience leaving in a festive mood, handshakes and good will all round.

The club’s Birthday again and we shall have a party. Everyone is invited.

will be here to join in the fun. Food and Frivolity for all will be the

theme for tonight. Roman has been here before and we enjoyed him so much as he is a

great entertainer, a singer with a fine baritone voice and a fine accordionist, and that is the

reason why we have invited him back again.

HAPPY NEW YEAR TO EVERYONE AND MANY THANKS FOR ALL

THEIR HELP AND SUPPORT DURING 2012